You know the feeling. Sometimes you wake up and it takes you a few seconds to get your bearings and figure out where you are. Well, that morning I didn’t have that. Before I’d even opened my eyes my subconscious mind had already become aware of the sound of the lake next to the van, the gentle press of my tiny dog on top of my calf muscles, and the clamminess on my face – the kind that comes from not opening the windows enough. I knew exactly where we were. 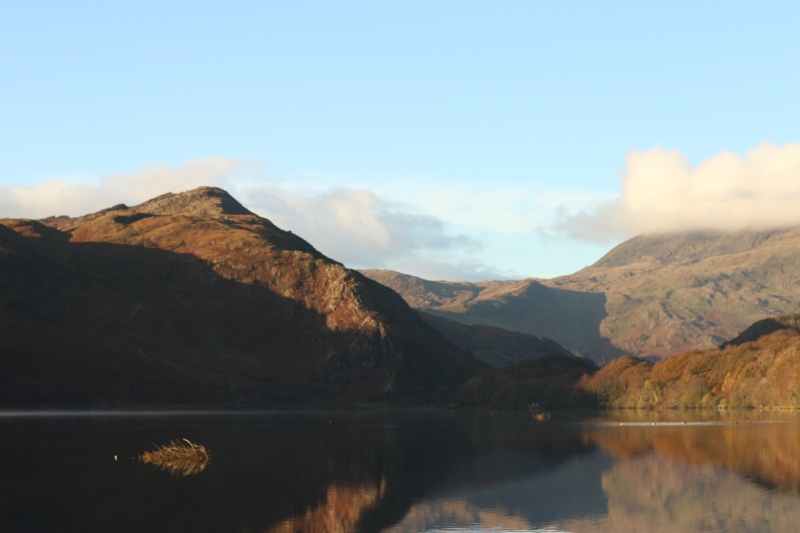 I gently crawled out from the blankets and slid open the side door on the van. The trees and hills that engulfed us were all set alight by the early morning sun – I guessed it was around 7am. The sky was clear and the only other sound besides my breathing was a very excitable gathering of ducks on the lakes edge. I closed my eyes, stretched up my finger-tips as high as I could and drew in a deep, cold breath of fresh mountain air. Good Morning Snowdonia.

I spun back around and was met by two pairs of groggy morning eyes – my human and my tiny dog; both curled into each other and taking advantage of the other ones heat. I smiled and suggested “Breakfast?” – a word recognised by both, which was met with big smiles and a waggy tail.

I scooped my mass of blonde hair into my hat, rubbed some coconut oil on my face and jumped into the passenger seat of the van; and on to Pete’s Eats we drove. We were silent as we wound down the road through Llanberis pass. We hadn’t been to North Wales in over a year, so in this moment we were just grateful for these views and these mountains again.

Over breakfast we poured through our scrambling guide book, eager to make the most of the incredible weather (a rarity in Wales!). After a little cross referencing with google and our OS maps, we settled on Moel Siabod – a light grade 1- scramble suitable for dogs. Perfect!

We wrapped up our left over sausages for Millie, hopped back in the car and made our way back up Llanberis pass towards Moel Siabod. The drive was easy, and only about 20 minutes away from the (now overcrowded) car park at the base of Snowdon. The glorious weather had brought hikers and tourists out from every crevice; all drawn to the clear views that were promised that the top of Snowdon. There was something deeply satisfying about driving past all of them and off into the distance for our own adventure.

We parked up in a large layby just after the Tyn-Y-Coed pub. I stepped out of the car and took a moment to let the sound of the nearby waterfall become the only thing in my conscious thoughts. I was abruptly interrupted by my tiny dog scratching at my ankle; her face read “Common Mum. We have SO much walking to do!”. Jamie and I went through the motions of checking our packs for the right kit (food, head torches, water, food, maps, guide books, food, first aid kit and so on) and making sure our boots were laced properly. 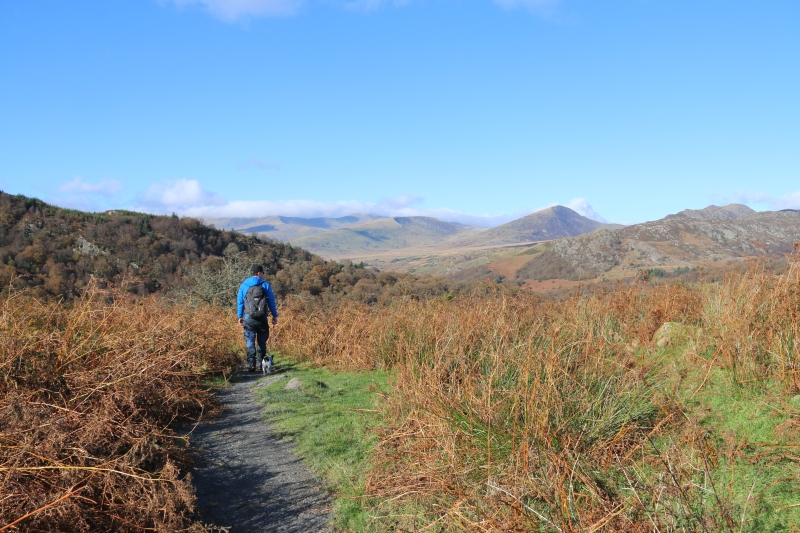 The path started just up from the layby we’d parked in, took us over fon Llugwy and lead us around driveways and farm entrances for a little while. It didn’t take us very long to reach the base of Moel Siabod. The stand-alone mountain rose up sharp and narrow, like a little dragons back. There was a path that went up the ridge directly in front of us, but that’s the one we intended to come down, not go up. Instead, we traversed along to the left of the mountain, not gaining very much altitude at all, and sticking to the well-marked trail. 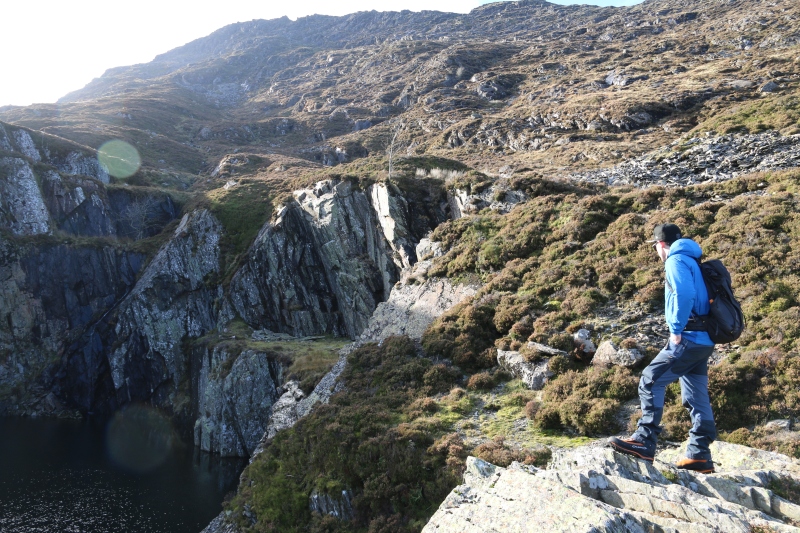 This path lead us up past a couple of lakes, in and out of old decrepit stone mining houses, around large piles of loose slate and past lots of tiny waterfalls – all of which are worth exploring. The third lake, Llyn Foel, is the one worth noting. Its main differentiating feature from the other two is its tiny island in the middle of it. The ridge directly on the opposite side of Llyn Foel is where all the exciting scrambling was due to start. The path is far better trodden on the right hand side of the lake; but ignore this and go left. We did not get that tip off until the very end of the day. Instead, we veered right, following the meander of the main trail. The path quickly became much more boggy and difficult. There hadn’t been rain here for a few days now, but there are a couple of springs that trickle into Llyn Foel , which means the ground around the right hand side of the lake is permanently saturated.

After delicately tip-toeing our way over the driest parts of the bog (which lost us a lot of time), we scampered round the corner of the ridge and were finally met by the sight we’d been craving all day – Sun kissed, climbable, Welsh rock! I had lost half a leg in the bog a little earlier, so we took a little break in the sunshine to scoff some calories and wring out my right sock. The air was calm. The only thing in my line of vision that moved were two buzzards playing in the gentle updraft of wind along Moel Siabod ridge. And that was it. No cars, no other humans, no tractors, no nothing. Compared to the scenes we’d seen at Snowdon’s car park earlier in the day, this felt surreal. Jamie squeezed my shoulder gently to indicate it was time to move on. I closed my eyes, drew in a deep breath and silently said a few words of thanks to myself (I try and do this as often as possible). 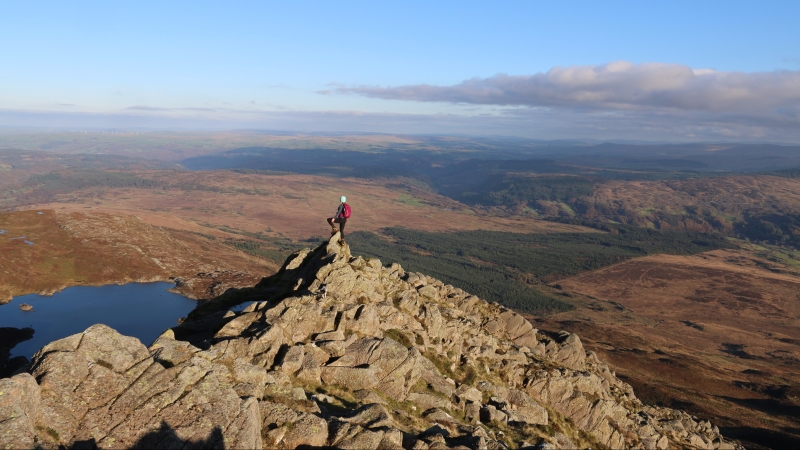 The scramble was exactly what we’d expected – easy , with a couple of technical sections where you had to think a bit, and all doable with our dog. Millie always wears a little harness with a handle that allows us to lift her over things if we have to. The scrambling section wasn’t overly long, but it was never boring. The views were incredible – the time of year meant that there wasn’t very much green at all, but the mountains themselves all seemed to carry a similar shade of red. We still had yet to see another human.

We scrambled up to the peak; over the brow of the hill we were greeted by our most spectacular view thus far. The sky was cloudless and lit up in a spectrum of oranges, pinks and blues. The horizon in front of us consisted of a sea of dramatic mountain tops and ridges that included Snowdons peak. The surrounding mountains were all painted red in the light of the late afternoon sun.

And the only beings that I had to share this spectacular view with? My human, my dog, and a few white dottings of sheep. My heart was so very very happy. 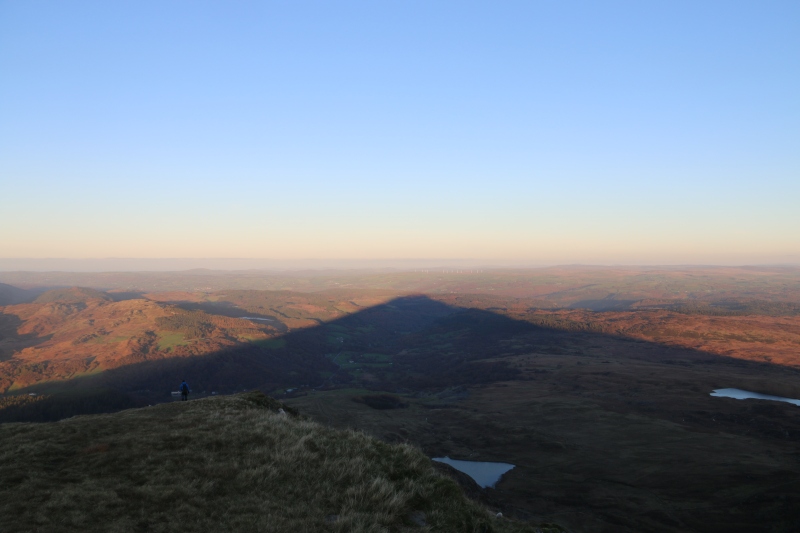 There was a distinct nip in the air – one that reminded us that this gorgeous sunset meant it would be dark soon. We danced our way back down the mountain – This time following the North Easterly ridge back towards Pont Cyfyng. It was a steep trek back down, but not as difficult as the ridge we scrambled up. We hopped through bogs and down big rocks – our hands and legs slower and less precise now after a day of being in the cold air.

We met up with the gate at the base of Moel Siabod, put on our head torches and our extra jacket under the watchful eye of some friendly sheep, and trotted back down to the car. We were tired, thankful and eager for some hot food. Our bodies and hands were already achy from being out all day, but our minds were already dreaming about the next adventure.

Over dinner Jamie pulled out our scrambling book again and looked up and me with the shiniest of eyes and said “Where to next, baby?”. Oh, anywhere with you darlin’.

Catch you next week for Day Two in the Mountains of North Wales!

Dragons Back week (well.. 2 days) with the best of the best!
Well this is flippin’ adorable and I really bloody love you.
The BEST little mini break away to 🇫🇷 to celebrate this wonderful mans birthday!