We pulled into our campsite somewhere after 10 pm, battered from a long drive. The sun had set out the driver’s side window hours ago leaving us to navigate the long single track roads to East Soar in the dark. The weather for the last week had been… less than favourable. Not what we wanted for race day. We pulled up next to the large awning that Adam and Siobhan had fought with just hours before; battling the strong winds and persistent rain so we’d have somewhere to all sit together the following morning. The awning stood still now and miraculously, was still upright. I didn’t even step foot on the ground, I just crawled through the gap between our seats, over our stove, pulled out the bed in the back of the van and made a nest.

Waking up is hard – but today I was wide awake before any of them went off. I stroked the soft spot on Affy’s head between her two ears and contemplated what the day may entail.

45km. Huh. That was further than I’d even attempted to run before, yet not even half the distance of my longest race this year. I had a solid 4 months of strict training under my belt and felt ready.. yet still a little unsure. How was I going to feel after 6 hours of running? Will my stomach play up? How will my feet feel?

I hadn’t even sat up to check the weather yet, but when I pulled back the van door to head to the showers, I was pleasantly surprised. Calm, quiet, cool and a little cloudy.

Siobhan and I got washed up, shovelled a load of breakfast into our faces, double checked our race pack, kissed the sleepy boys goodbye and jogged down to the start line – a little under 2km from where we were camping.

The registration tables and start line were set up in the barn of East Soar Farm. Hay bails, wood chippings and fairy lights littered the barn like something out of a Pinterest photo. The atmosphere was surprisingly calm. There was no rush. People weren’t cutting each other up to try and register quickly. Everyone just… chatted. It was our first event with trail events, but there were lots of people who ran with them regularly and were using this opportunity to catch up.

Instead of the *head down, game face on* atmosphere you get at road marathons, here, you got laughter, hugs and hi5’s. I knew we’d chosen a great first marathon.

After a quick briefing, we gathered outside under the giant blow-up start line arch, readied our Stravas, tightened up our race packs and set off.

The first 9km took us over rolling fields, down narrow trails and along a few country lanes until we got to the checkpoint just North of Hope Cove. With the elite runners being the exception, we were all running at roughly the same pace. The terrain had been friendly and relatively flat, lulling us into a false sense of security. We made it to the first checkpoint in about an hour – a little faster than we’d anticipated, but we didn’t feel like we’d been pushing past our comfort zones. We refuelled on salted peanuts and bananas, refilled our water bottles and set off.

The next 5km were considerably more hilly – but with a winter of training in the Beacons behind us, we weren’t intimidated by this. In fact, the rolling coastal path was a welcome relief from the dramatic ascents we were used to back home. This section flowed easily – running niggles from months of training ebbed and flowed, but nothing too painful flared up. We were greeted at the next checkpoint by two smiling faces who, despite the gusty conditions, seemed very happy to be there! Again, I scoffed down a couple of handfuls of salted peanuts and bananas, topped up on water and set off down the homeward stretch. The marathon course was two loops of the half marathon route – so the next checkpoint was the start/finish line at East Soar Farm. 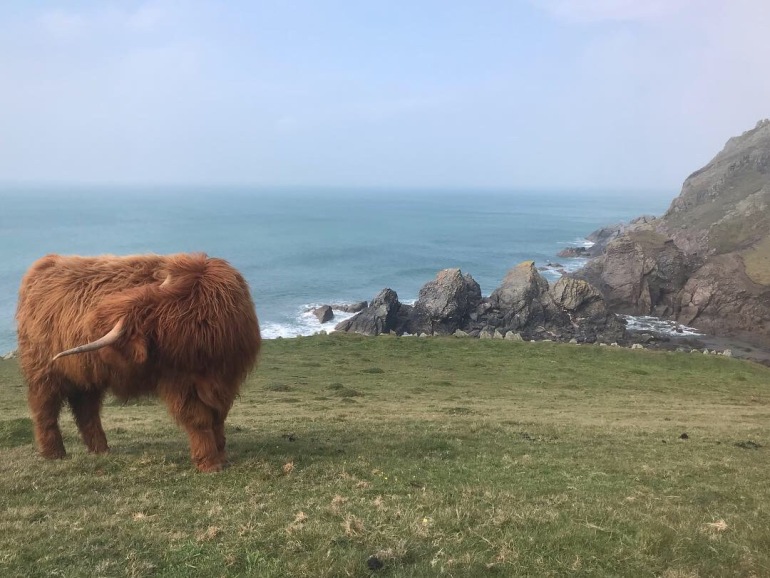 The next section of the coastal path was stunning – the hills and rock formations were more dramatic than the rest of the course. Giant jagged fins of rock stuck out of both the sea and the land itself. The terrain underfoot was less stable and the descents were much steeper – but the views were breathtaking! It was actually along this stretch of coastal path that we ran past the two boys and Affy bouldering on the rocks below! 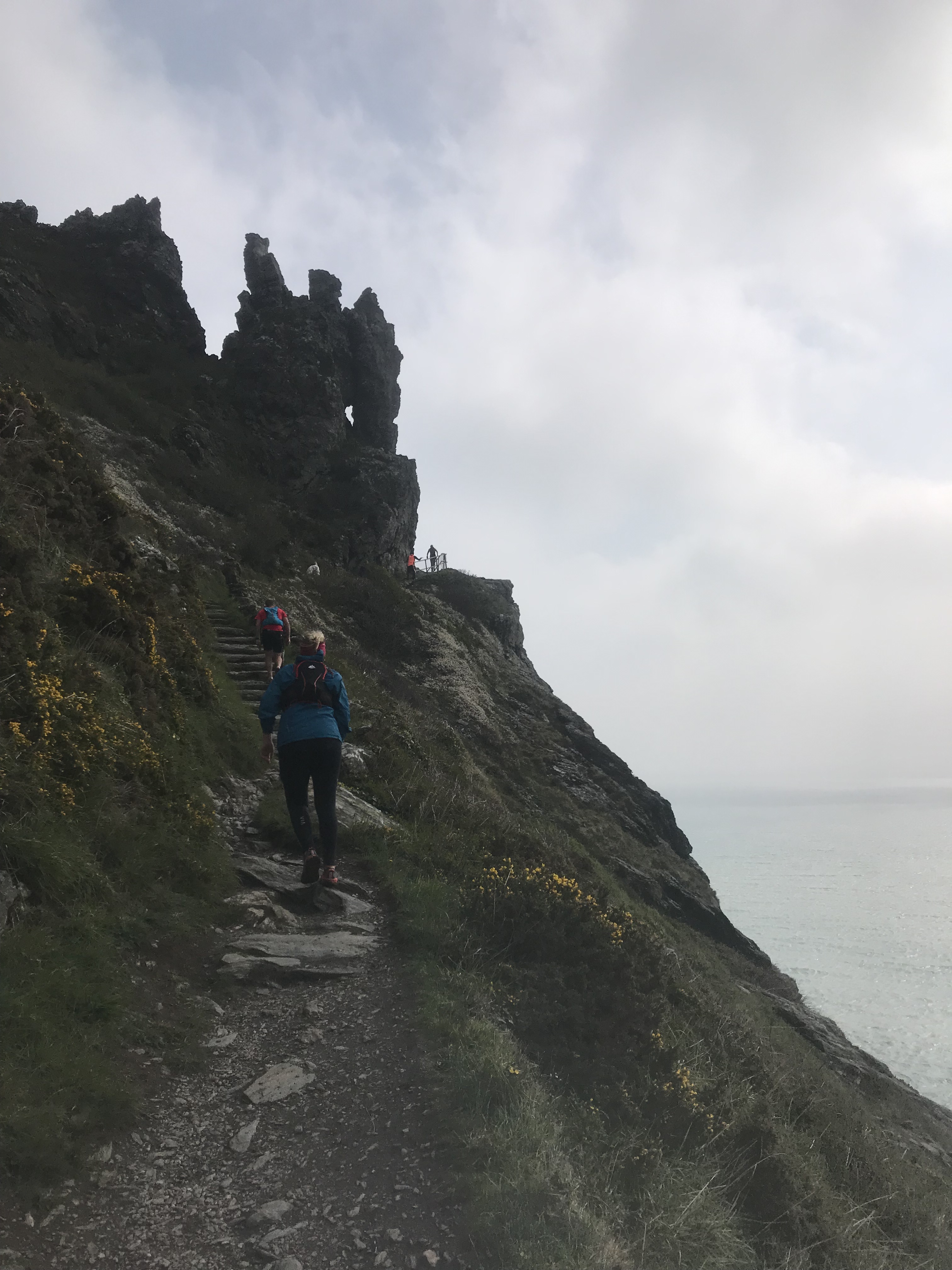 The last climb up to East Soar was a stinker! It was a toughie after 21km – I dreaded to think how it would feel the second time around. We were still relatively full of energy as we passed through East Soar – we restocked on food, electrolytes and hi5’s and took this opportunity to congratulate our fellow runner before setting off for the second loop – after all, everyone had already run a half marathon and that is cause for celebration!

I was surprised that I didn’t dread leaving for the second loop – I didn’t dawdle too much at the checkpoint so I didn’t have enough time to really think about it! As expected, the second half was notably tougher. Being a looped course meant we knew exactly what was coming. I thought that that would put me off, but actually, I really like the familiarity. The little wrong turns we took in the first lap didn’t happen in the second lap – meaning we were able to just get our heads down and focus on the running.

The stretch to the 4th checkpoint (it was our 1st on the first loop) was probably the hardest stretch for me. It didn’t seem to flow as well as before. We fiddled with layers, stopped for a few wee breaks and stuffed a few gels into our faces. This was also the only section with quite a bit of tarmac in between the hilly fields, which is never a welcome sight. We were both flagging, but we managed to claw it back just before the 4th checkpoint. I jogged in, smiling from ear to ear, joked with the volunteers (who remarked how fresh I looked.. How little they knew), wolfed down some peanuts and set off with Siobhan down the coast path.

We were reminded, quite quickly, why we chose this to be our first marathon. The ‘wall’, the aches and the nagging fatigue all seemed to fade when we joined the coast path again – we were far too busy talking to cows, pointing out the array of wildflowers and gawking at the stunning rock faces. 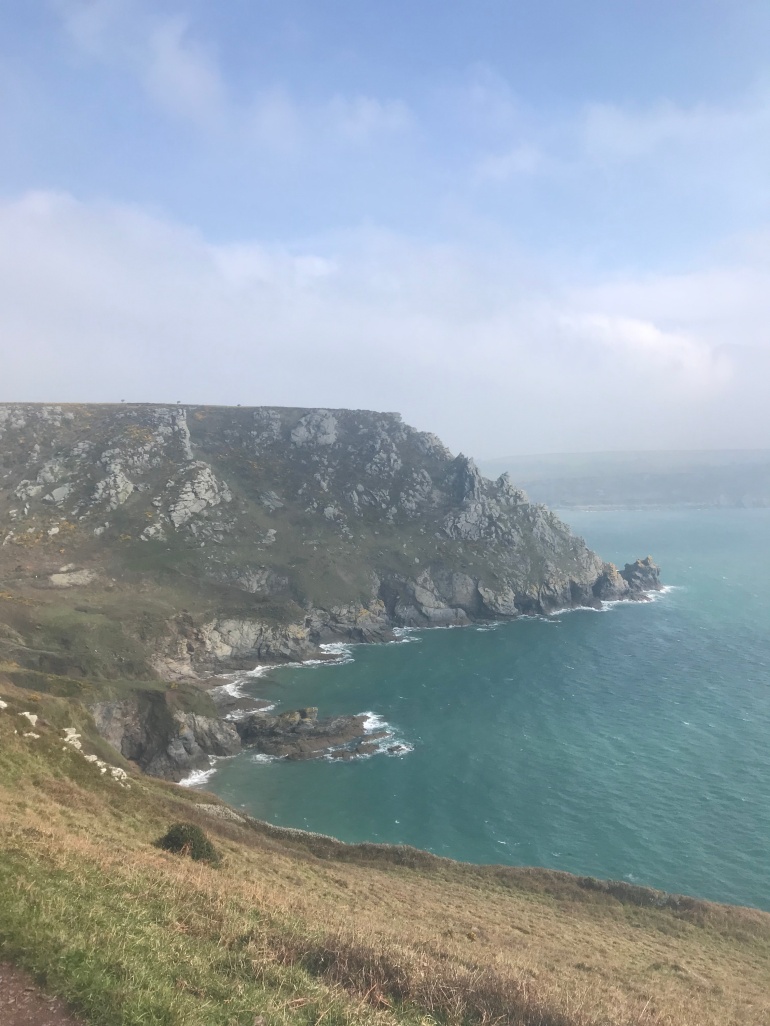 The 5th checkpoint came and went quite quickly (Siobhan had the most spectacular faceplant on her way down to that aid station – and remarkably, brushed off and trotted on. I admit, I probably would have had a paddy). We didn’t hang around at all. We were now eager to see the boys smiling faces at the finish line. We were well on our way to finish in under 7 hours – which is exactly what we were aiming for. 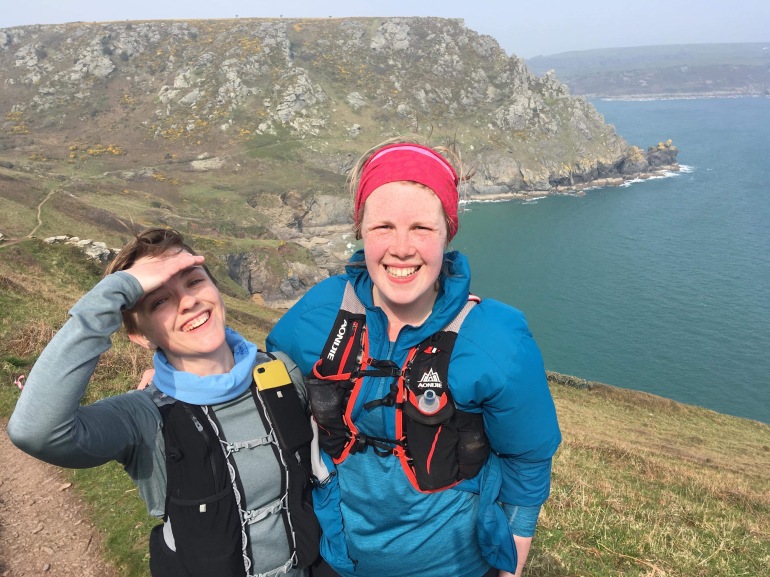 We trotted down the last 8km of the coastal path and back up the stonking hill to the finish line. We were full of both relief and endorphins – a little bit broken but wide awake – feeding off the energy that came from running up to the finish line. And honestly? If you told me I had to get back out there and run another loop, then I probably could have done (after a load of food of course) – and to me, that’s pretty cool.

We washed up back at the campsite – taking time to massage our achy legs in the hot showers, and then headed down to the Ferry Inn in Salcombe. We stuffed our faces with vegetables and cider and filled in the boys on stories from our day.

Will we be back next year? You can bet your sweet bottom we will be!

Have a great week, Ferals!